Do you want search ?

Close
By MtM
Feed Me

I don’t know about you but bad meatballs really piss me off.

If they’re mushy like reconstructed toothpaste, hard as floorboards or packing the flavour equivalent of a washcloth, they have the potential to get me sulking, angry at the cook, for a whole day. This means I have often been on the receiving end of my own anger, many times because I thought I could wing it with the binding element – regular stale bread instead of breadcrumbs – or use less than superior mince. And I am not being pedantic here. The meat bit really does make a difference. I tried buying the best organic mince the supermarket had to offer and my meatballs still came out tasting livery and bloody, meaning I would over season to offset this. End result? Wishing I’d had a dog I could have given them to.

So I kind of made it my mission to succeed at meatballs. They needed to be moist but retain some firmness, be flavoursome and silky, and still be able to stand out on their own even when they weren’t being lovingly enveloped by lashings of the richest tomato sauce this side of Italy.

I found a trusted butcher and I can tell you that was half the battle won. The rest was trying and testing with seasoning, not going crazy with the eggs and finding the right breadcrumbs. You can use normal ones but I find that the Japanese Panko breadcrumbs are perfect because they are thready, dry, flaky and airy and don’t turn your mixture into bricklaying filler.

This is what I came up with and it’s a hit in our household. I find that mixing pork and beef really rounds up the flavour and texture of the meatballs, and adding the smoked paprika kicks it up a notch in the yumminess department. The three year-old eats them too, which isn’t necessarily a marker of excellence since he’ll eat raw pasta in orange juice and bits of dried rice he finds on the floor, but at least he’s not refusing it. I get to look like a good mother who’s cooked from scratch and put some meat and veg into her kid’s tummy, which means I am a mighty goddess, even if only for a meal.

2 tins of quality tinned tomatoes – I like the Cirio brand

Half a ripe red pepper

A glug of red wine

Half a bunch of chives

A bunch of parsley

A pinch of nutmeg

Start by making the tomato sauce. Chop up the onion, the celery and the pepper and grate the carrot. If they’re organic don’t peel them as you’ll get more vitamin goodness from the skin. In a large cast iron casserole pot saute the vegetables on a medium heat in a good glug of olive oil until the onion is translucent. Add the chopped garlic and saute until you can smell the aroma. Add the wine and cook until it evaporates. Add the two tins of tomato and two tins of warm water. Season with salt, pepper and a pinch of nutmeg and add the sugar. 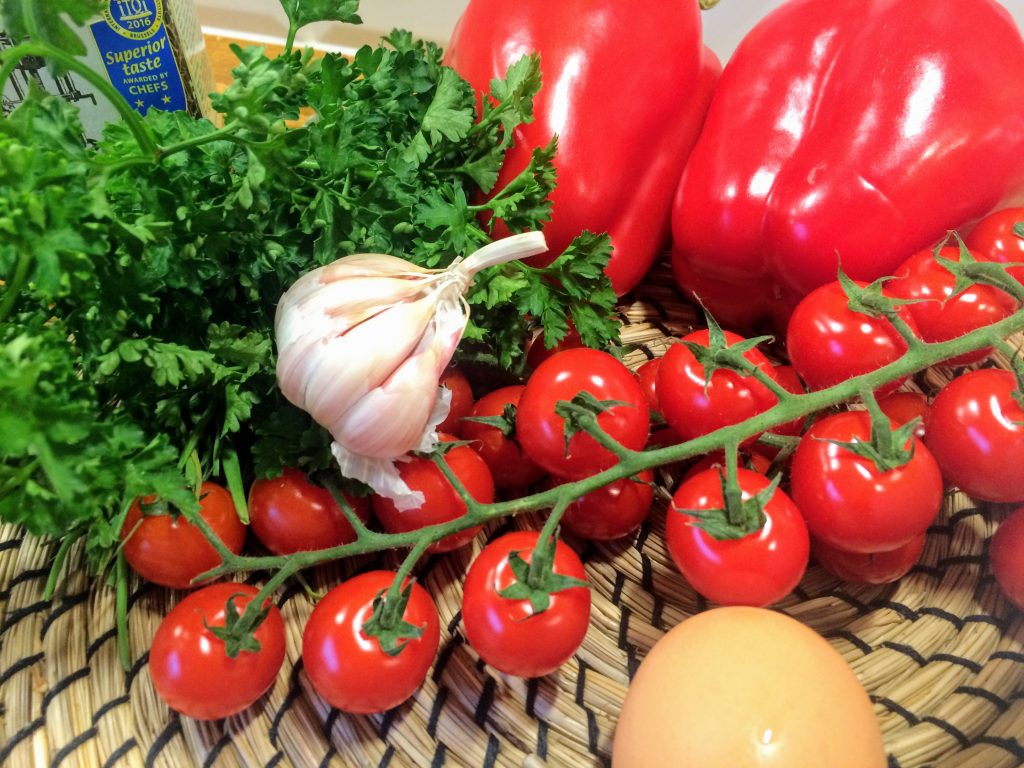 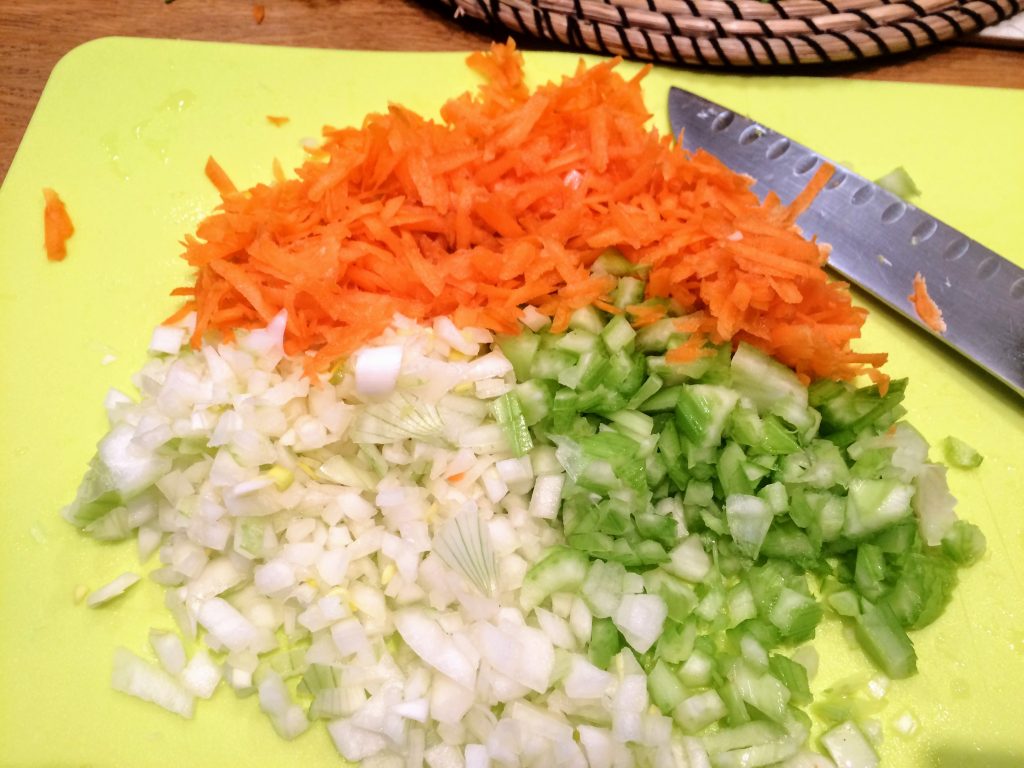 Prepare the meatballs by placing the meat, egg, chopped chives, half a bunch of chopped parsley, breadcrumbs, smoked paprika, parmesan cheese and a sprinkle of oregano in a bowl. Mix with your fingers until the mixture is well combined and the egg is evenly distributed but don’t overmix so they don’t come out too dense. 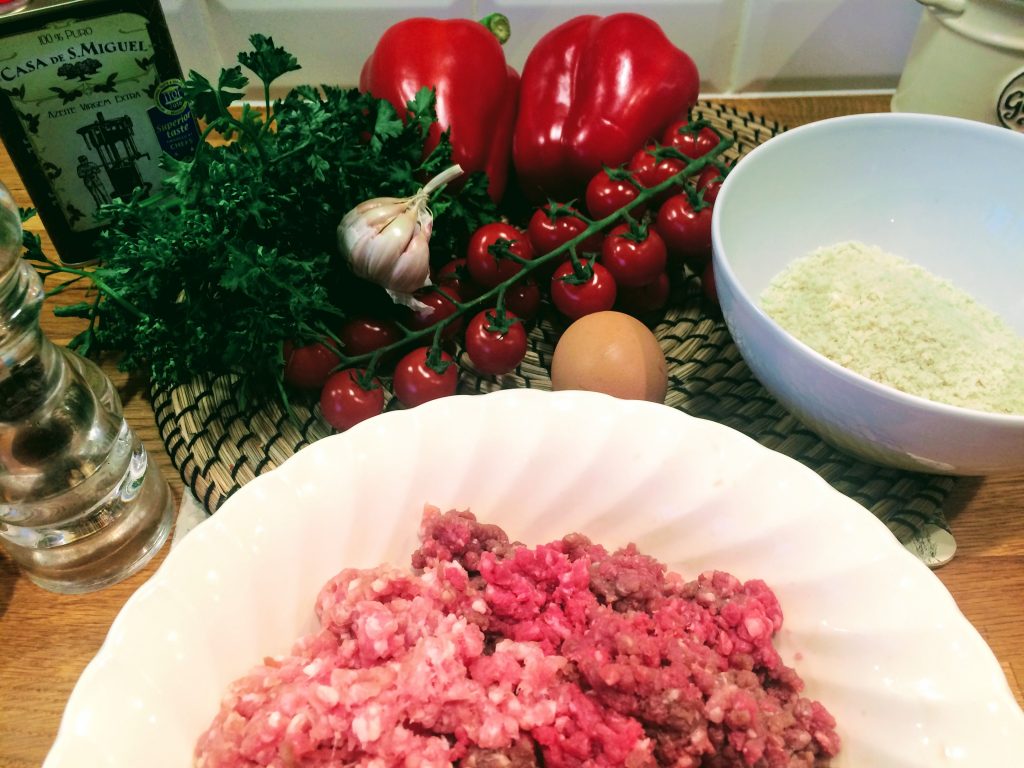 Make the meatballs by rolling the mixture between your hands into golf ball sized balls. If the mixture feels too sticky add some more breadcrumbs. Place the flour on a colander and sprinkle it over the meatballs, making sure they are coated all over.

Check your tomato sauce. It should be thickening up nicely but still be plentiful enough to accommodate the flour dusted meatballs, which will thicken it further. Add about a teaspoon of oregano.

The sauce should have reduced enough after around 40 minutes on a low heat. At this stage you can either keep it as is, with the chunky vegetables, and add the meatballs or you can blitz it up with a blender. I have taken to the latter mostly because I get to hide all those veggies in the sauce and smuggle them past the kid.

Add the meatballs carefully and make sure they are covered by the tomato sauce. Check the seasoning and simmer for about 20 minutes or until the meatballs are cooked through.

Serve with pappardelle, fettuccine, spaghetti or any other pasta that tickles your fancy. Sprinkle with parmesan and chopped parsley. 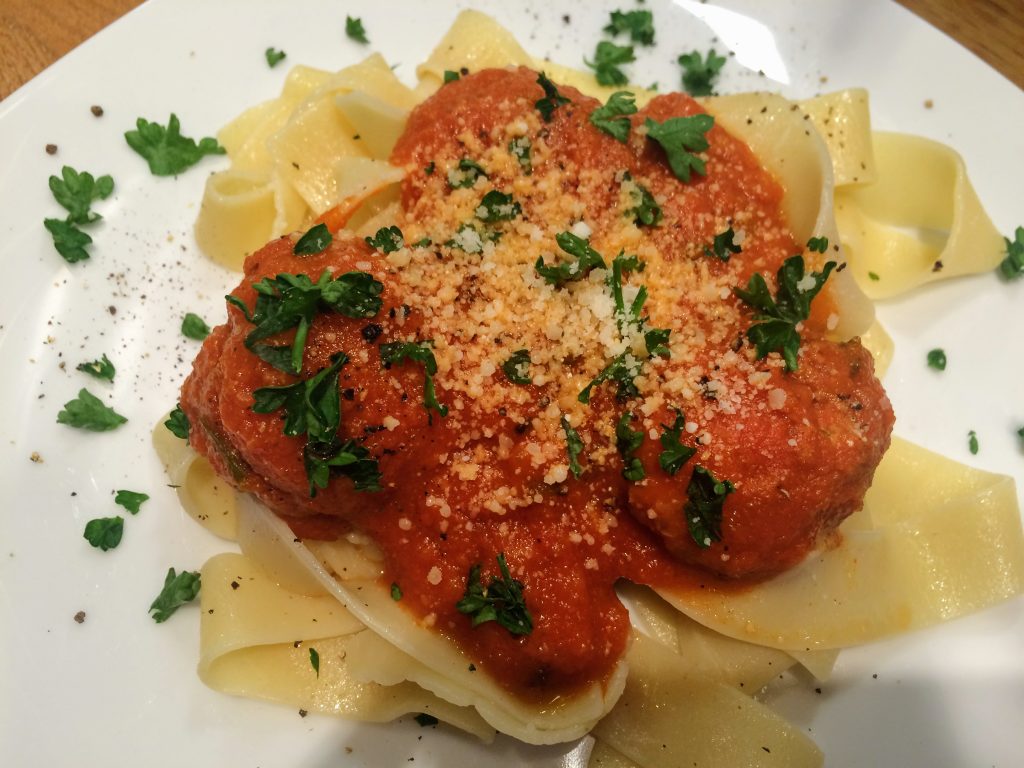 Top tip: If you happen to have the oven on, stick in about 3 cloves of garlic and when they’re roasted add them to the sauce before blitzing. It’s bloody marvelous.

Proudly linking up to:

Full-time working mother to one Speedy Gonzales of a little boy trying to keep her sanity, pay check and clean hair. On most days.

Spiced Lamb and Sweet Potato Casserole
The Brioche
It’s the weekend, baby! Or is it?

Your email address will not be published. Required fields are marked *

About Mind The Mummy

TV producer, mother to a Speedy Gonzales of a little boy, trying to keep her …Read more >>